Importance of Prepping Your Garden…In The Fall

I have always been a procrastinator; whether it was waiting until the day before a 20-page research paper was due in college, invoicing people weeks after I should have (I am self-employed), or filing my taxes in late March at the earliest, I rarely get started on things early. And it’s no different when it comes to my garden.

At the end of every growing season, what I’m usually thinking about is cleaning my garden up, getting rid of the black plastic covering that I use over my raised beds, and blowing out the lines on my drip irrigation system. The furthest thing from my mind is preparing my garden for the next growing season. In my defense, there are usually other things that occupy my time after a summer of gardening — this year, it was fencing in my yard, which, in retrospect, could have waited until the spring. But I’ve justified doing it by telling myself that it’s now ready to protect my vegetables from wayside transients (which have never been a problem) and wild animals (which have been a problem even though I live in the second largest city in New England).

But this is the year that I have finally realized the importance of prepping my garden BEFORE it needs to be done. On my to-do list for spring 2019 is rearranging my planting beds so that the ones closest to my house get more sun, rebuilding one that is falling apart, building four more for expanded garden space and filling it with a loam/compost mixture, rearranging my drip irrigation to fit the new layout, building some a-frames for my vining vegetables, throwing down calcitic lime, creating a wood chip border around the beds to prevent vegetables from getting lost in overgrown grass, and most embarrassingly, spreading out the horse manure (seen in the pictures) that I got in the fall and never spread. I also have seeds that I saved but have yet to package. That’s a crazy amount of stuff to do when what I really want to be doing is focusing on growing strong, healthy plants ready for transplanting after the last frost, which is usually in early to mid-May. One thing I did get done was planning my new bed-by-bed planting layout. I use Photoshop with a grid overlay, but you can just as easily do it on graph paper. What’s great about this is that it helps you visualize/optimize the best companion planting so that you don’t have plants fighting over the same resources once they’re finally in the ground.

But beyond all the things that I should have done, there are also things that I could have done to get myself ready for the upcoming growing season. For instance, every February/March, I start my plants from seed in 9-ounce plastic cups in a jig that I built specifically for my bay window. Those cups need to be bought and have drainage holes drilled in them and I always wait until the week I start planting my seeds to do that (thanks, Amazon, for two day shipping). I also find myself waiting until this time to order the seeds of the new plants I decide to grow.

If I had done all these things after the growing season, between the months of October and February, I wouldn’t have to do it now. So, boys and girls, learn a lesson from Uncle Nate and get as much growing season preparation done as you can in the late fall so that you don’t have to do anything in the spring…besides planting your awesome seedlings in your already prepared garden beds that is. 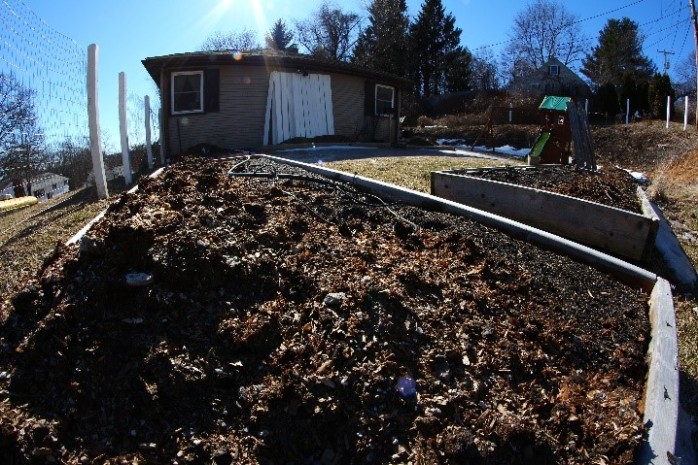 August 12, 2019: Our Farm Our Food has put down new roots in our forever property! It’s Official we now own a 115 Acre farm that has its beginnings over 200 year ago.

February 2019: We are working towards getting our place sold and in the meantime starting some plants from seed to plant on our New Farm.

January 2019: So we decided to pull the trigger on buying a farm. Our property, the place where Our Farm Our Food came to life is on the market!

December 2018: Well we’ve come across an opportunity of a lifetime. We stumbled across an old family farm that is for sale, stay tuned.

Fall 2018: Garden done for the season, time to mull over what we learned and plan for next season

March 17, 2018: Its that time of the year again. We started last weekend. Onions, Leeks and Rice to name a few